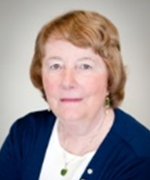 Monique Frize is Distinguished Professor at Carleton University. A clinical engineer (1971-1989), Dr Frize became a Professor in 1989. Monique published over 200 papers in journals and conference proceedings on clinical decision-support systems, infrared imaging, and ethics. She is Fellow and Life member IEEE, Fellow Canadian Academy of Engineering (1992), Fellow Engineers Canada (2010), Officer of the Order of Canada (1993), recipient 2010 Gold Medal (Professional Engineers Ontario and Ontario Society of Professional Engineers) and five honourary degrees.
Monique held the national Northern Telecom/NSERC Chair for women in engineering at UNB (1989-1997), and NSERC/Nortel Chair for women in science and engineering, Ontario (1997-2002). She is a founding member of INWES (International Network of women engineers and scientists) and its president between 2002 and 2008. In 2007, she founded INWES Education and Research Institute, a charity organization, and its president since 2007. Her books: The Bold and the Brave: A history of women in science and engineering published by University of Ottawa Press (2009); Laura Bassi and Science in 18th Century Europe published by Springer (2013); Ethics for Bioengineers published by Morgan & Claypool (2011), and Health Care Engineering Parts I and II published by Morgan & Claypool (2013).