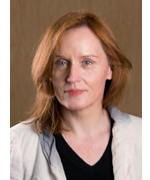 Eva Bezak is a Professor in Medical Radiations at the University of South Australia and Director of Translational Cancer Research at the Cancer Research Institute, University of South Australia. Previously she was a Chief Physicist at Department of Medical Physics, Royal Adelaide Hospital, providing services to radiation oncology in South Australia (SA). She lectures on various topics in nuclear and radiation oncology medical physics and radiation biology. Her current research topics include: investigation of second primary cancers risks due to radiotherapy, radiobiology, modelling of tumour growth, novel dosimetry and micro dosimetry techniques for verification of patient doses, proton therapy modelling, targeted therapies and others. She has authored and co-authored over 120 papers, presented at conferences and co-authored books on radiotherapy physics. She is actively involved in a number of development projects and organising committees, related to radiotherapy infrastructure, establishment of new radiotherapy centres, staff education and training, scientific meetings, policy development. In Australia, she was involved in development of national and state cancer plans for radiation oncology. She is currently appointed a member on the South Australian Radiation Protection Committee. She is an active member of medical physics professional community in Australia and Australasia. In 2010-2011, Prof Bezak was elected the President of the Australasian College of Physical Scientists and Engineers in Medicine (ACPSEM), also serving as an Australian representative on the Asia-Pacific Federation of Medical Physics Committee. She was the project leader for the government funded ACPSEM proposal to develop new national training program for imaging medical physicists. Recently, she was a member of the expert working group under the Australian Academy of Sciences to prepare a report on future accelerators in Australia. Currently, she is serving as the vice-president of AFOMP and a board member of the Better Healthcare Technology Foundation of ACPSEM.