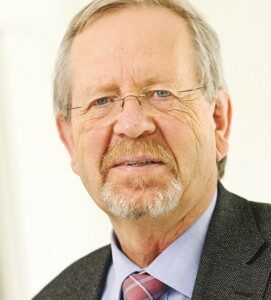 Wolfgang Schlegel has made outstanding contributions to radiation therapy physics at the German Cancer Research Center in Heidelberg. Together with his colleagues, he developed novel radiation therapy technologies that significantly improved the precision and effectiveness of cancer therapy with ionizing radiation. His research covers important areas of radiotherapy physics and technology, such as 3D treatment planning, stereotactic radiosurgery, 3D conformal radiotherapy, intensity-modulated radiotherapy (IMRT), image-guided radiotherapy (IGRT), and ion therapy. His department has had a decisive influence on the precision and tailor-made dose distribution of the radiation. Prof Schlegel has already received numerous prizes for his work: in 1996 he received the "Karl-Heinz Beckurts Prize" from the Federal Ministry of Education and Research for successful technology transfer and in 2001 he was nominated for the German Future Prize. In 2003 he received the German Cancer Prize, and in 2010 the German Society for Medical Physics awarded him the Glocker Medal for his lifelong commitment to medical physics. He has been an honorary member of the German Society for Radiation Oncology (DEGRO) since 2013.