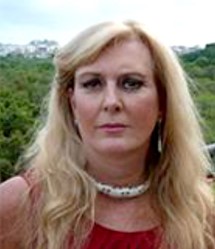 Dr Renha is a researcher of the National Commission of Nuclear Energy (CNEN). For more than 10 years was head of Diagnostic Radiology Division of the “Instituto de Radioproteção e Dosimetria” (IRD/CNEN) and currently is working at the Radiation Protection and Safety Division. She is also the President of the National Committee for the Certification of Radiation Protection Officer of CNEN.

Currently, she is a member of the Computed Tomography Accreditation Program of the Brazilian College of Radiology and Secretary of Brazilian Association of Technical Standards (ABNT) committee - CE 26:020.04 and IEC committee. And member-elect of the International Medical Physics Certification Board (IMPCB) and of the female medical physicist sub- group of IOMP. In the period of 2013-2015, she was a member of the Committee of Education and Training of IOMP. Currently is chair of the Honours and Awards committee of IOMP (2015-2018) and member of the Affiliated Commission 4 (AC4) of the International Union of Pure and Applied Physics. Also is member of Brazilian Association of Medical Physics (ABFM).