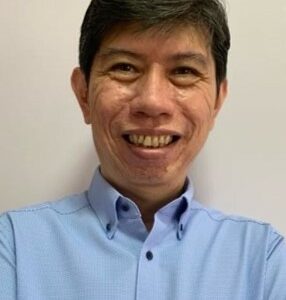 Dr Lee is the Chief Radiation Physicist and Chairman of the Radiation Safety Committee at NCCS. He manages the Medical Physics team and Radiotherapy Physics at the Division of Radiation Oncology and heads the Secondary Standard Dosimetry Laboratory (IAEA SSDL network, Radiotherapy) for Singapore. He served as a special resource advisor to the Ministry of Health’s PBT advisory committee. Since 2020, he has been serving as the President of the Society of Medical Physicists Singapore. He is actively involved in the South-East Asian region, organising the 2013 AOCMP-SEACOMP congress in Singapore and served as the President of SEAFOMP from 2015-2019. He was also in the initial group that formed the ASEAN College of Medical Physics with the key objective to enhance the training of Medical Physicists for the region. He introduced the first ROMP residency program in Singapore, was involved in various Medical Physics related projects, and was course director for a few IAEA regional training workshops. His research interests and publications are in radiation dosimetry, treatment planning and Monte Carlo simulation for radiotherapy and PBT. He was awarded the Institute of Physics Singapore’s Physics Award 2015 for his contribution to medicine and the AFOMP Outstanding Medical Physicists Award 2020 for his contribution to Medical Physics in Singapore and the region.