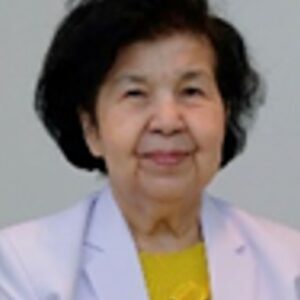 Anchali Krisanachinda, the Founding President of the Thai Medical Physicist Society, was the President of SEAFOMP from 2005 through 2012, one of the Founders of AFOMP and has been the AFOMP Treasurer since 2001. She was a member of the IOMP ETC and IAB for Asia (2003-2006), became the Chair of ETC (2006-2009) and joined the Validation and Accreditation Committee of ETC (2009-2012).

Dr. Krisanachinda has been dedicated to the promotion of medical physics, both nationally and internationally, serving a lifetime to the advancement of the science from the university to the United Nations. She obtained “Outstanding Contributions Over the Last 50 Years” awards at ICMP 2013 at the 50th year of IOMP, Brighton, UK.

For her contribution as President of SEAFOMP (2005-2012), Co-organiser of ICMP2016 in Bangkok, Thailand and for hosting the IUPESM AC meeting.